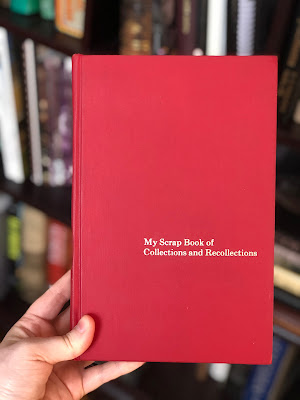 The late Barry Schrader gifted me a plethora of books shortly before he passed this year. I've been slowly working through them all, so when I picked up a plain, red-cover book titled "My Scrap Book of Collections and Recollections," I wasn't sure what to expect. I found that this book, written and published by the late DeKalb resident Helen Bingham in 1972, documents her time in the area as well as some local history. She has various sections on early Northern Illinois University, DeKalb corn, and barbed wire. I wanted to share the section on Jacob Haish specifically, the lengthiest section of all the barbed wire inventors. It's truly worth the read. I enjoy her title for the Haish section: "The Nearly Forgotten Man."

"Jacob Haish was born in Germany. When he was nine years old, he and his family sailed for America; the year was 1836. His mother died soon after reaching this country, and the father took his young family to Ohio where he farmed and did carpentry work on the side. Jacob, as with so many pioneers, worked hard and received a meager education. In 1846, he left his father's home and settled in DuPage County; there he married Miss Sophie Brown in 1847. One year after that they moved to Pierce Township, DeKalb County, where he farmed for three years.

When the young couple moved to the village of DeKalb, Haish worked at his carpentry trade. With the first one hundred dollars he saved, he purchased lumber and started his successful building and lumber business.

Haish was annoyed with the farmers who purchased boards from him for the purpose of fencing and then complained to him because the lumber was not strong enough to hold out against brute force. It was this problem which led him to experiment with a stronger fence, and thinking of the effectiveness of the osage-orange tree thorns upon livestock, he conceived the idea of making thorns of wire. He made a fair barb in 1873; and in January, 1874 it was perfected enough to be patented.

In the Biographical History, a book which gave the biographies of a few of the residents of DeKalb County, it pointed out how Haish next conceived the idea of inventing a machine to make his fence wire. As he was working on this idea, his counsel advised him to enter a caveat to secure his rights, but time ran out before he applied for a patent.

Those were trying days. The childless Mrs. Haish proved herself to be a true and faithful wife, a loving helper, not only in the days of comfort and luxury but also in those days of opposition and competition-- most assuredly a time which would try the temper and disposition of any man or woman.

The Young Friend: Haish had a loyal friend in Charles Salisbury. When Haish first started his business in DeKalb, he hired this bright young man to help him with his affairs. Salisbury took time off to serve in the Civil War (he was made first sergeant upon his enlistment and was honorably discharged three years later as a decorated Lieutenant,) and upon his return from the war he resumed working for Haish. He was a man of many talents that made him indispensable to his employer.

While the Haish Manufacturing Company was going through its long and fiery litigation, Salisbury's pen and pencil were busy-- supposedly for advertising purposes. But, his cartoons and verse carried barbs of their own. The following is an example:

'Well, perhaps you may be dreaming, perhaps you're in a whirl; But somehow Haish's fence is winning the plaudits of the world.'

The fight between the barb wire manufacturers was very intense. Some of the opponents of Haish tried to have a little fun at his expense, because he was a 'Dutchman.' In reply to this, Salisbury wrote:

'The June bug has gaudy wings, the lightning bug has fame. The 'Dutchman' has no wings at all, but he gets there just the same.'

These rhymes and cartoons by Salisbury created great interest throughout the country, and the Haish barb wire became even more prominent because of them.

Haish Pleads His Case: After the fight was over, Haish published a pamphlet with the title of -- (now get this) -- 'A Reminiscent Chapter from the Unwritten History of Barb Wire Prior to and Immediately Following the Celebrated Decision of Judge Blodgett, December 15, 1880' in which he rather wistfully sets forth an account of how he came to 'realize' the idea of barbed wire. It was a wordy document, so only this part of it shall be quoted here.

'It never occurred to me that the Patent Office might disclose some knowledge of prior use or state of the art. In fact, at this time, I hardly realized the purpose of the Patent Office, or the need of its services; but later on it behooved me to seek knowledge of friends familiar with its workings, and immediately got in line to protect my interests. My ignorance was almost my undoing, and two or three trips to Washington, D.C. became necessary to put me 'en rapport' with its system.'

An Adjustment Made: Haish switched to another form and manner of applying a wire barb to plain wire, in his thoughts wished 'Uncle Joe' Godspeed, and proceeded to manufacture his own type of barb wire. Haish did well in his business. Not only did his factory turn out millions of pounds of barb wire, but he also manufactured woven wire fencing, plain wire, staples, nails, harrows, tubular steel, barrel carts, bobsleds, etc. He employed hundreds of men at good wages, and he even built a series of group houses, or more appropriately, they were apartment houses (one was called the 'Beehive House.') By this means, he could furnish his employees with an opportunity to rent housing at a moderate fee. Many of these structures, now modernized, are standing today-- an example of such can be seen on North Fourth Street.

Haish's Dream House: Haish designed his own large very ornate house. It was located on Pine Street, diagonally across the street from the First Lutheran Church. It was torn down in the 1960s. The house was vaguely reminiscent of the architecture found in the more humble homes in Germany. The revealed timbers on the upper story, with the cement-like product applied between the wooden beams, and a few round projectures imitated the turrets found on the ancient stone castles occasionally seen in that country. It was a complex house, once called an 'architect's nightmare.' But, it suited Mr. and Mrs. Haish.

Alice Darnell Weeden recalls attending a party at the Haish residence. It was a party given by Verna Haish, a niece from out of town who had been offered the use of her great uncle's home for the event. Alice Darnell was fresh from a little country grade school, along with Miss Haish, Clara Hubbard and other girls at the party who had won scholarships to the State Normal School. They were first-year students and, since Alice was only fourteen, she didn't observe much of the details of this interesting home as she would have had she been a few years older.

To Alice the home was awe-inspiring, the grounds neat and attractive, and especially memorable were the white lion statues guarding the driveway gate. Verna enthusiastically took her young guests on a tour of the house. There was the circular staircase intricately carved from some kind of dark wood and four large, elegantly furnished bedrooms. They especially intrigued the young girls, because the walls in each room were painted with a pastel mural -- each one of a different country in Europe. There was the Switzerland room, Alice's favorite, and the other three rooms were dedicated to views from England, Germany and either Sweden or Norway.

The built-in bookcases were plentiful, each shelf completely filled with the most interesting looking books. Here and there throughout the house were oil paintings and a small statuary, but the girls naturally remembered the dining room best for the delicious refreshments were served there upon the finest china. Of course, the crystal and silverware were elegant also. Mr. and Mrs. Haish, quiet, gracious people, seemed to enjoy the young ladies' presence very much.

The Quiet Couple: Haish became a wealthy man, owning land in six different states; in the township of DeKalb alone, he owned about twelve farms. In the city of DeKalb proper, he owned 130 houses. Besides his manufacturing business, he started the Barb City Bank in DeKalb, of which he was president. In spite of all this monetary success, the Haish family remained just as humble as the day they moved from the farm into the village of DeKalb. He always admired the formal education he was deprived of, and was helpful to young students. Among other acts of generosity, he gave money to the new Normal School when it opened in DeKalb and willed to the city the beautiful and well-stocked library located on Oak Street.

Haish, who surely had a fine selection of horses and carriages to choose from, was, nevertheless, known to stroll by the Glidden residence and if children happened to be playing in the yard, he would pause and pleasantly visit with them for a time. Mr. and Mrs. Haish were a gentle couple, unselfish and kind, but not particularly concerned with the social whirl."

For more information on Bingham, please see this column by Barry Schrader.