This article was originally published in the winter 2021 edition of Cornsilk magazine.

I've been getting to know my uncle, two days a week, almost 100 years after his death.

Last fall, Rob Glover, Director of the Joiner History Room, invited me to explore the Joiner History Room archives for any Jacob Haish related items. I've been blogging about Haish, my fourth-great uncle, for almost six years now, and it was just assumed that I had seen most of the local archival items. After all, how much can really remain on a man who had no heirs and his house no longer stands?

I had so much to learn.

Starting the process was simple enough. Rob did a very generic search for "Haish" in the Past Perfect collection database and printed out a list that was 36 pages long. We've been working through the list for weeks now; I notate a few interesting items for each visit and Rob pulls boxes from the archives. Then I dig through files and folders like a child opening presents on Christmas morning.

Some items are surprising; I couldn't believe that the last few monetary checks from the Jacob Haish Estate were saved! Others are things I'd seen before, like a photocopy of that photo of Jacob Haish, the one everyone recognizes and is immortalized in a painting at Northern Illinois University. I've also seen items that I never even knew existed. I have audibly gasped, laughed, and said "wow!" as something "new," well, new to me, is unearthed.

As we continue to pull countless items related to Haish and his many ventures, such as barbed wire, farm implements, banking and more, I am truly stunned at how much wonderful history has remained local, and right in my "backyard" at the DeKalb County History Center. Better yet, these were items saved by someone who found them important, and they made sure they found their way to the Joiner History Room. For that, we are so lucky.

These are just a few unique items that have been "rediscovered." As I continue to research and learn more about items, they will be posted on my blog at JacobHaishStory.com.

Two pins that simply say "Haish," with no more archival documentation other than their color and dimensions, these baffle me. Which Haish had them made? Was it Jacob? Did a relative run for political office? Perhaps a school spirit pin for the former Haish School in DeKalb? Much to my disappointment, my research and pleas for help on Facebook have continually come up short. 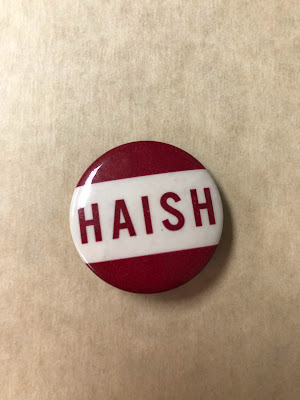 In my time researching Haish, there has been this odd, almost urban legend story surrounding him: that he was illiterate. Multiple sources have relayed to me that because of his immigrant status, arriving in the United States from Germany when he was 9 years old, that he could not read, write, or even sign his own name. That myth seems to be debunked, as multiple documents in the Joiner archives show Haish's signature. Two of the most legible and interesting instances are when he signed his name in pencil on lined sheets of paper; they were petitions encouraging school board ventures. He was a staunch supporter of schools and libraries in DeKalb and beyond. 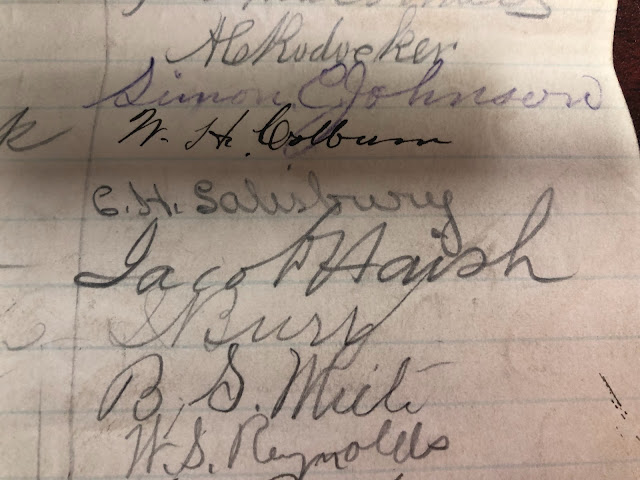 In a stack of calling cards from various but prominent DeKalb ladies, I saw one for "Mrs. Jacob Haish, DeKalb, Ills." Sophia's was the best quality of the bunch, printed on a thicker paper with intricate scalloped edging.

Calling cards, or visiting cards, as they are sometimes called, were used to announce someone's arrival, or left as a message for those who were not at home. I imagined Sophia Haish appearing at a fellow DeKalbian's doorstep and presenting her card. I wondered about the conversations she would have had regarding both pleasure and business. I think she may have done quite a bit of business talk, as Jacob often included her in his ventures and she was even co-president of their Barb City Bank. 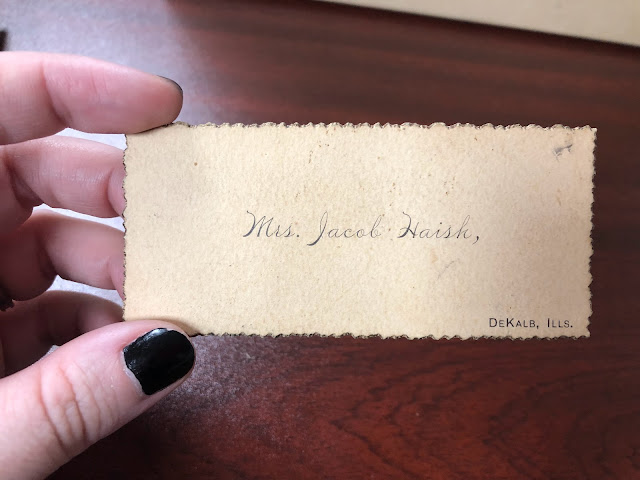 Whether you're exploring the history of your home, school, or in my case, a very distant relative, the Joiner History Room at the DeKalb County History Center is a great resource. And just when you start to think you've seen it all...you'll realize you've only cracked the tip of the iceberg. Call or stop by to start your research journey.